Retrospect: The Mystery of Nevermore

In less than a month is the release of The Mystery of the Bones and with it, the conclusion of the Snow & Winter series. My first complete, published series, in fact! I wanted to take a moment to look back on each of the previous titles and give Sebastian, the most fun and yet most difficult character I've written to date, a proper sendoff. Thank you for joining me!

The very first attempts at this story are from 2012. At his core, Sebastian still very much resembles those early musings. A sarcastic, crotchety shop-owner with achromatopsia who discovers a murder and learns he likes (loves) sleuthing.

Some of the more obvious and drastic changes?


Crazy, right? There were huge differences in the emotional well-being of the characters, interaction with the environment, and just overall vibe of the story. Nevermore went through half a dozen drafts after that, but I was never able to find the path I wanted for the story. Neil's character had always been just this side of unforgiving and never redeemable, which I think is a very necessary aspect of the series. Both Neil and Sebastian needed to heal and grow. I wanted to represent a relationship that can often be difficult for humans in a positive light. (After all, being friends with an ex can be hard, if not impossible.)

Neil's personality became the catalyst for change. Once I toned him down, everyone else fell into place. Sebastian was still had this emotional baggage he was struggling to come to terms with, but his heart was no longer an open wound. That allowed me to focus more on the mystery first and weave the romance in second.

And with that mystery came a lot of research. I average several hours of research a day when writing, even with a contemporary setting like Snow & Winter. Does it all end up in the book? God, no. I'd be writing non-fiction if it did. Does even half? No. But when I go down a rabbit hole, I want to know the entire story behind whatever person, artifact, or event I'm looking into. Even if two hours of research becomes nothing more than a single line of dialogue, I believe having a strong understanding of the subject matter has an impact on word choices. If I am confident, then Sebastian is too. And his character is all about proving he knows a thing or two about everything.

Some of my favorite moments from Nevermore was the banter between Sebastian and Calvin. Well, to be honest that's my favorite part in every book. But their relationship is so new here, and only just developing into something more romantic, that their back and forth has a slightly harder edge. But it's still an overly nosy busybody and an exasperated cop tapping down emotions for each other.

Winter took careful steps around my melted-snow-and-blood trail, eventually making his way back to me. “Mr. Snow.”
“Detective Winter.”
“Do you give all of the men in your life a murder case for Christmas, or just the really special ones?” he asked, hands in his pockets as he stopped to tower over me.


“Really,” he said gruffly. “But I don’t want you leaving the city, understand?”
“What am I going to do, walk to Jersey?”
“I ought to arrest you on grounds of being a smartass.”


I threw my hands up. “Look, all I’m saying is, it’s weird. Really weird. Have there been any other deaths lately that—”
“You’re not privy to that information,” Calvin quickly answered.
“I’m not asking for case details.”
“You’re a civilian. I appreciate your theory, but let this go. Don’t start thinking you can play amateur sleuth just because you know a thing or two about crime scenes.”


“And don’t go digging around where you shouldn’t.”
“Who, me?”
“Seb, I’m serious. No sleuthing around.”
I waved a hand at him before tucking it into my jacket pocket. “I won’t.”
“All right.”
“You be careful too,” I said.
He leaned down and kissed me in the privacy of his doorway. “Have a good day.”
I smiled as I followed him down the stairs to leave the building. It was all very sweet and domestic.
Except for the ongoing murder investigation.
But it’s always something.

Since Nevermore's release in 2016, it has become available in French, published with Reines-Beaux, as well as audio, narrated by Derrick McClain. And to celebrate the upcoming release of Bones, Nevermore's ebook is on sale for 99 cents across all third-party vendors. (Some sale prices may still be pending with the vendor.)

You can add the book to your Goodreads shelf or find it on BookBub. Codas are also available for free at my website.

Make sure you check out the giveaway below. I'm offering one signed paperback of The Mystery of Nevermore! Event ends September 2, 2019.

a Rafflecopter giveaway
I hope this was an interesting look into the history of the series, and if you're new to Sebastian and Calvin, you've been tempted to give them a chance! Please join me next Monday as we take a look at The Mystery of the Curiosities and host another giveaway.

Southernmost Murder, my standalone mystery-romance about a quirky historian and his FBI Special Agent boyfriend, is now available in audio! Narrated by the very talented Wyatt Baker—celebrate Friday with Aubrey and Jun on the streets of tropical Key West.

Blurb: Aubrey Grant lives in the tropical paradise of Old Town, Key West, has a cute cottage, a sweet moped, and a great job managing the historical property of a former sea captain. With his soon-to-be-boyfriend, hotshot FBI agent Jun Tanaka, visiting for a little R&R, not even Aubrey’s narcolepsy can put a damper on their vacation plans.
But a skeleton in a closet of the Smith Family Historical Home throws a wrench into the works. Despite Aubrey and Jun’s attempts to enjoy some time together, the skeleton’s identity drags them into a mystery with origins over a century in the past. They uncover a tale of long-lost treasure, the pirate king it belonged to, and a modern-day murderer who will stop at nothing to find the hidden riches. If a killer on the loose isn’t enough to keep Aubrey out of the mess, it seems even the restless spirit of Captain Smith is warning him away.
The unlikely partnership of a special agent and historian may be exactly what it takes to crack this mystery wide-open and finally put an old Key West tragedy to rest. But while Aubrey tracks down the X that marks the spot, one wrong move could be his last. 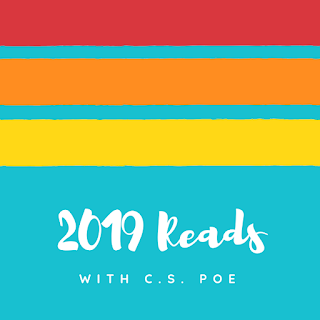 It's been a rough summer and my plans for more pleasure reading and reviewing throughout 2019 were pretty severely thwarted. I ended up very, very sick in June and July with debilitating migraines that needed to be dealt with at the ER, immediately followed by a bad ear infection, then an awful reaction to the prescribed medication!

Unfortunately, all those events made reading extremely difficult. So I only have two suggestions. That being said, they're pretty great books! Below are the BookBub links to my reviews. They're also mirrored on Goodreads if you prefer this site.

The Mage on the Hill by Angel Martinez
Posted by C.S. Poe at 1:18 PM No comments:

C.S. Poe
C.S. Poe is a Lambda Literary and two-time EPIC award finalist, and a FAPA award-winning author of gay mystery, romance, and speculative fiction. She resides in New York City and is an avid fan of coffee, reading, and cats. C.S. is an alumna of the School of Visual Arts. Her debut novel, The Mystery of Nevermore, was published 2016. cspoe.com